Welcome to our blog

Here is our second roundup of reading-related research from 2014.

Reading Harry Potter improves attitudes to stigmatised groups such as immigrants, homosexuals and refugees amongst readers who identify with the main positive character (Harry), or readers who dis-identify with the main negative character (Voldemort), through perspective taking. With younger groups (who may find it difficult to comprehend the meaning of complex ideas) reading and discussing specific passages related to prejudice had the same improvement in attitudes. This is described in ‘The Greatest Magic of Harry Potter: Reducing Prejudice’, Vezzali, 2014.

The research suggests that because Harry Potter is a fantasy world, there are no direct references to real-world minority groups. General issues of prejudice are addressed in a more indirect way making it easier to apply the principles learnt, to any real-world group.

The changing attitudes of primary, secondary and university students were examined in three different locations, one in Italy and two in the UK, using experiment and control groups to compare attitudes.

The research identifies clear scope for educational interventions using fantasy books, and another way to incorporate book reading into the national curriculum. 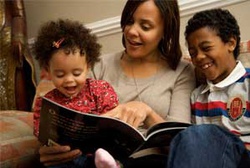 This research found that a play session which matches the themes in a story book before it is read, enhances the context and meaning of the story. This leads to enhanced engagement when the story is read, particularly amongst children with hearing loss. The results showed increased interaction with the reader, increased participation and satisfaction and more positive emotions during reading for children with hearing loss.

The study included 23 pre-school aged children, 12 with typical hearing and 11 with hearing loss which ranged from mild to profound. It compared an experiment group who had a themed play session with a control group who had a non-theme related play session. All families used spoken language with minimal to no sign language.

This is a particularly promising research finding, because literacy learning occurs when children find the activity fun, and stay actively engaged. This can be especially difficult to achieve for the parents and teachers of children with hearing loss, partly because of the high language demands of story book texts. Using this approach is simple, fun and effective in both school and home settings.

This project combined memorable experiences such as visits to local castles, caves or the zoo, with an approach called ‘Self-Regulated Strategy Development’ (SRSD) which helps pupils plan, monitor and evaluate their writing. It was targeted at year 6 pupils who were struggling with writing.

The findings are important as in 2013, about one in six pupils left primary school without reaching the expected level in English and fewer than one fifth of these pupils achieve a C or above at English GCSE.

A short nap after reading is beneficial for remembering new words

University of Sussex research with three year olds finds that although repeat readings of stories are good for learning new words, a short 20 minute nap after reading a story is more beneficial than reading the story multiple times, particularly for long term memory recall of the new words.

The study involved a group of 24 three-year-olds who regularly took an afternoon nap during their nursery class, and a group of 24 three-year-olds who did not. In each group, they were either read the same story three times, or read three different stories (followed by their regular nap, or continuing with other classroom activities). All the children were exposed to the same number of new words.

This report, commissioned by the All Party Parliamentary Group, examines issues around school libraries and makes four key recommendations for England: