Welcome to our blog

A Dog Called Flow was my first ever publication. More than 90 books and 20 years later, why is this particular story still in print? It was first published by Mammoth (now Egmont), then Barn Owl, and this newly updated edition is coming from Troika Books. What is the secret of this story’s endurance? One reason is the interest it has generated because the main character, Oliver, is dyslexic, and his dyslexia plays its part of the story. Does that make this an ‘issues book’? No.

My idea for a story was, at its very briefest, ‘A boy wants a dog, and he gets a dog’. Why that theme? Because when I was at the junior school age of my intended audience, my biggest longing and passion was yearning for a dog. But a boy wanting, and then getting, a dog isn’t a story. There needs to be a particular reason WHY the boy wants and needs a dog at that particular moment, and a reason WHY he can’t easily get what he needs. There needs to be struggle, and it all needs to matter a lot. Oliver’s dyslexia indirectly provided both those things. 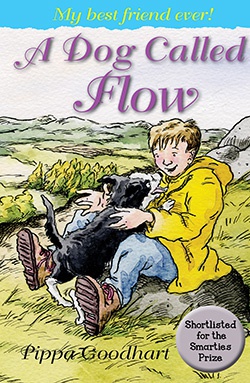 The story starts with Oliver kept in at school lunchtime. He must do the work that he’s failed to finish in the time that all the other children have done the work in. He’s miserably trying to write when some of the other children out in the playground start making faces at him through the window. Oliver picks up the school dinner that he has beside him, and he throws it at the window and them… and then he runs out of school, and off for a walk on the fells (this is set in the Lake District).

He longs for a dog very particularly at that point because a dog would be a friend who didn’t laugh at his problems or care about his work. That’s WHY he particularly wants a dog at that moment. Oliver’s parents are cross with him for having run out of school, so when he asks if he can have a dog they naturally say ‘no’, so the dyslexia is indirectly the reason WHY he can’t have a dog.

A character with dyslexia

But there’s more to it than that. Most children’s stories manage to get rid of the main character’s parents in some way. Enid Blyton sent her children off on holidays away from parents. Roald Dahl simply killed off James’s parents (randomly eaten by rhinoceros as they walked down a London street in the second paragraph of the book) so that he could suffer at the hands of Aunts Sponge and Spiker. The parents are got rid of for the simple reason that the job of parents is to protect children, preventing adventure. They need to be out of the way in order for story to happen.

But isolating a character doesn’t have to be so obvious. Any of us can be emotionally isolated even when surrounded by loving family and friends. Oliver’s dyslexia gives him the misery of having a problem that his kind parents and teacher simply haven’t fully understood. More importantly, he doesn’t himself understand what his problem is. Until the end of the book.

The inspiration behind the story

A Dog Called Flow is dedicated to my husband Mick, ‘the man and the boy’. The man gave me courage, and time free of two small children, in which to have a go at writing this story when I didn’t think it was something I could do. I knew that the boy Mick had suffered badly at school with teachers who didn’t understand that he’s quite severely dyslexic. So too is one of our daughters. And when I explain to children in schools about how, if you are dyslexic, numbers and letters don’t stay still on the page to be read, there are still children whose eyes suddenly light-up, and they say ‘that’s what happens for me!’.

Oliver’s dyslexia is background to the front story which is about his secretly getting a puppy, Flow, without parental permission, and then having to prove to his parents that they should keep Flow. That main story is about the friendship between Oliver and another boy as they train puppies together, and compete, and a life or death adventure up on the fells where Flow and Oliver both prove themselves.

And, yes, when I was eleven years old, at long last my parents gave in. We went to a dog rescue place ‘just to see’ what they might have. Tatty funny Rags jumped out of the shed, knocking my mother over into a patch of nettles … and that was that! Rags loved us all unconditionally, and we loved him, happily ever after!